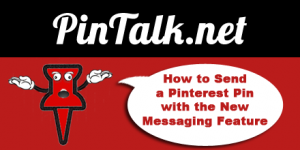 Now with the ability to message in both desktop and mobile devices, Pinterest users can talk to each other easily with the addition of a stream that is just for direct messages. While playing around with the message pop-up, I noticed that users could now drag and drop pins and send them to other users.

To Send a Pinterest Pin via the Messaging System click in the send a pin arrow the appears at the top of every Pinterest pin. A messaging dialogue will pop up in the lower left corner of your screen (Figure 1)

Simply drag any pin on the screen to your dialogue box, add a message and send it! (Figure 2)

The rules:
1. You must be following the other user to send them a message. They do not have to be following you.
2. The original commenting feature does not work in the new messaging box. i.e. Users cannot say, ‘Hey @metrony, how are you?” this will not trigger an additional message to Pinterest user metrony. However, it still works in the comments section of a pin.
3. Sending a pin via drag and drop does not work on mobile devices