The buy it button will appear in the upper right-hand corner of the pin but to the left of the pin it button. See figure 1.

Buy able pins are not live on the site just yet. According to Pinterest, buyable pins will be available “in the near future.” Just as it did with Promoted Pins, Pinterest is rolling out the new feature with a limited number of major brands. According to a Pinterest business blog post, these retailers are Macy’s, Marcus and Nordstrom, plus retailers powered by Demandware like Cole Haan and Michaels. The roll out however, will include over 2 million pins! In addition the Buy it button will be available to those with a Shopify online stores. It was not clear if users all retailers with Demandware stores could access the Buy it button at launch or just the initial test group. 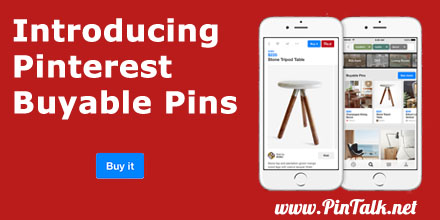 Pinterest buyable pins will be available to iPhone and iPad users via mobile app. Users can pay for items with a credit card or with Apple Pay too! The Buy it button allows users to purchase goods without leaving Pinterest. It’s not clear if these buyable pins will work with Promoted Pins. If they do, conversion rates could really improve!

The Pinterest buy it button is not available yet but is expected within the next few weeks. For android users, it may be a bit longer. In the interim, if you are using Shopify or Demandware now is the time to log into your account and simply add the Pinterest channel.

Disclaimer: I receive a commissions for purchases made through Shopify links in this post