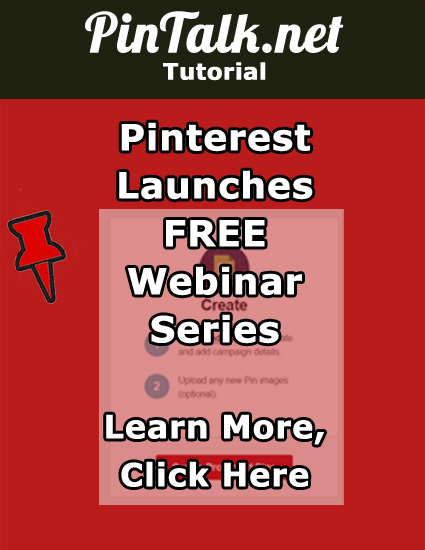 Pinterest announces a free webinar series that begins today. We like FREE, right? The series is designed to educate businesses about Pinterest’s ad platform. The Pinterest Ad platform centers on the social channel’s product, Promoted Pins.

Pinterest is a social channel launched in 2010. Users save posts, called Pins, to their accounts. The Pinterest Pins are organized into categories, called Pinterest boards, on the Pinners’ accounts. Pinterest currently has over 110 million monthly active users worldwide. Popular Pinterest topics include home décor, beauty, travel, and doo-it-yourself products.

Based on their titles, the webinars are clearly meant to help advertisers learn about Pinterest Ads and how they can boost business. Snapchat, which is only a year younger, has surpassed Pinterest in monthly active users.. Pinterest is also trying to chip away at the advertising revenue enjoyed by Facebook and Instagram

The webinars are free. Social media mavens can sign up here:
https://business.pinterest.com/en/blog/webinar-series-how-grow-your-business-pinterest