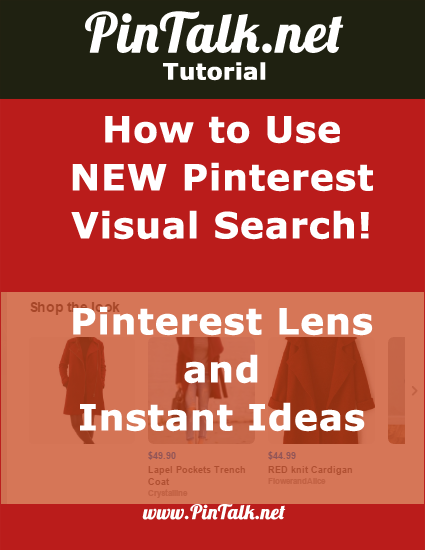 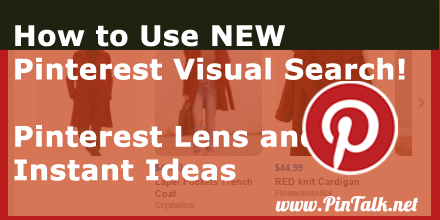 Two new Pinterest Pintalk features rolled out this week. This round of updates is highly image driven of course but not so much about functionality. That may seem like an obvious thing to state about Pinterest, but past updates have included improvements to the advertising platform, search functionality, and apps.

Both features are designed to help improve visual search capabilities to help users find Pins with similar images. The first Pinterest update is referred to as the “Pinterest Lens.” The second is called “Instant Ideas.” Both are available to all users via the mobile apps and also on desktop Pinterest. Both features are geared toward getting Pinterest users to shop from within the app.

Pinterest has more than 150 million monthly active users across the globe. The visual social channel has expanded its features and advertising offerings outside of the United Sates to make the social sharing platform more diverse. Although still smaller than social giant Facebook, Pinterest has outpaced Twitter in its number of monthly active users. Its advertising platform, which began with Promoted Pins, is still rough by Facebook and Google AdWords standards, but Pinterest is adding features that make the social channel more attractive to brands.

The first Pinterest update, the Pinterest Lens, appears as white circles on a Pinterest user’s home screen Pins. When a user clicks on or taps a circle, the screen changes and shows more Pins that display the similar images. For example, of a user is looking for a cookie recipe, they can find different variations by clicking or tapping on a phot of a cookie.

Below are two screenshots of the before and after on the Pinterest app. Two Pins changed after I tapped on the white circle. [Figure 1] 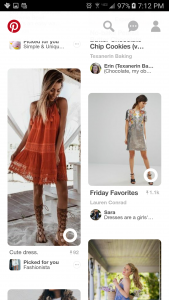 The results are more dramatic on desktop Pinterest. On the desktop version, when a user clicks on the white circle [Figure 2], about one-third of the screen changes and displays similar images to the one that was just clicked. [Figure 3] A user can mouse horizontally to the center and click again and then again in the last third of the screen. If you don’t like the result, you can certainly tap on any Pins’ circle to change that area of the home screen as much as you want.

On the mobile app, with such a small view screen, only one or two pins seem to change. Either way it is a fun way to look at images. The drawback to the Pinterest Lens is that it only works on the home screen. That means is not possible to visually search for something you entered into the search bar. Users cannot the Lens to dig deeper.

The other update, called Instant Ideas is also a visual search and discovery tool, aimed at increasing conversions from the Pinterest app. Unlike the Lens, I had a hard time finding an Instant Ideas Pin because there wern’t many of them. To find an example Pin, I searched for “jackets” my favorite example topic on Pinterest. Then I clicked on the category at the top, and narrowed my search to winter jackets by clicking “winter.” I finally turned up the Pin in Figure 4. Notice the Pins with one or more blue dots.

Click on the Pin for the close-up view, and then click again on the blue dot. The close-up Pin shows three “Shop the Look” Pins on the bottom. [Figre 5]

Some Pins have two dots to tap. Unlike the Pinterest Lens, Instant Ideas functions better on the mobile app than it does on the desktop. On the Pinterest mobile app, tapping each blue dot brings up the item as three more ‘Shop the Look” Pins. In one example, I found the blue dots were over the model’s coat and jeans. On my mobile app, I could tap each dot for a different set of Shop the Look Pins – one for the pants and one for the coat. On desktop, this feature does not work as well. I see the same three pins whether I click on the coat or the jeans.

Both are very cool and fun features! Both are clearly intended to make in-app shopping easier!