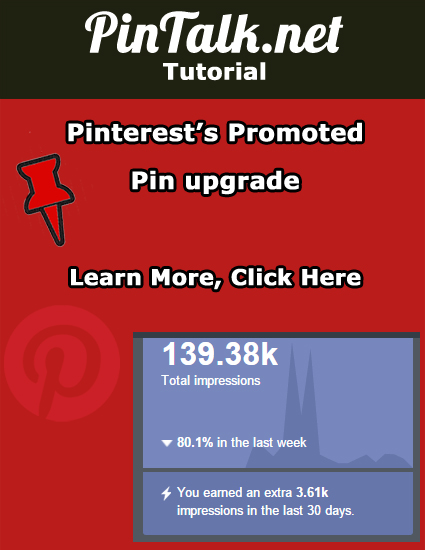 I wanted to write another post about Pinterest’s new Buyable Pins, but I cannot find one anywhere. Buyable Pins are supposed to roll out to iOS first. I looked on desktop Pinterest, on an Android phone, updated my iPad’s app, and checked my daughter’s iPhone – but no luck! So, I’m going to write about the changes to Pinterest’s ad platform instead.

I am currently managing a Pinterest promoted pin campaign. Pinterest’s Promoted Pin ad platform upgrade rolled out in the middle of this campaign which has been running for about two weeks. There are some significant changes to the Promoted pins admin area, but it is still nowhere near as robust as Google Adwords.

Changes to the Promoted Pins ad platform include adding tracking pixels, allowing advertisers to choose between two goals (Figure 1), and the interface is also a bit nicer looking. 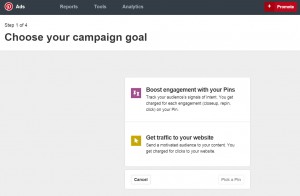 Pinterest now gives advertisers a tracking pixel to track clicks on a pin. The tracking pixel is placed on the website that the Promoted Pin is linked to. This is a good addition to the Pinterest ad platform.
Another way to add tracking is to write a custom URL for the promoted pin so it shows up as a line item in your web stats package. There will be a future blog post on Tracking Promoted Pins! 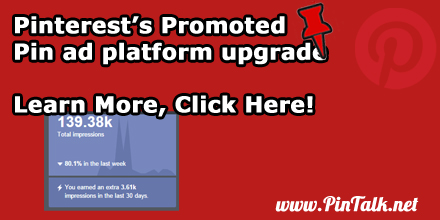 Another upgrade to the Pinterest Promoted Pins platform is the ability to choose between two different types of campaigns. Advertisers choose between campaign types by choosing a goal – either boosting pin engagement or increasing traffic to their website.

I was confused by the pay for engagement goal, so clicked on the Pinterest Promoted Pins help button for an explanation. The Pinterest help page for more information on choosing goals for a campaign simply repeats what the ads manager states:

Boost Pin engagement: You can increase engagement with your content through cost-per-engagement bidding. You pay each time someone egages with your Promoted Pin through a closeup, repin or a click.

(I copied and pasted, typos and all!)

It seems like advertisers pay whenever a pinner clicks on a pin, even if they don’t click through to a website, the advertiser pays. I guess this would be used to increase the accounts following, but I’m not sure.

Other than the above changes, the Pinterest ads manager still only lets users add keywords, gender, location and device. There is no day-parting or interests to choose from.