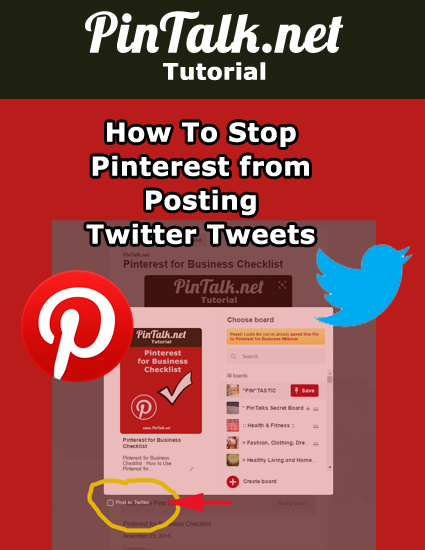 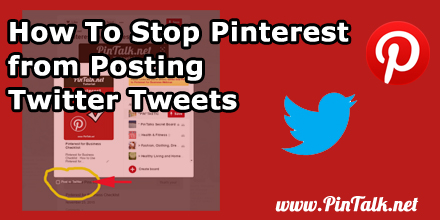 According to Pinterest, 75% of the pins on Pinterest link to products on brand websites. Pinterest reports that now has over 100 million users. The vast majority of Pinterest users are female although 40% of all new users are men*. The Wall Street Journal reported this month that Pinterest earned $100 million in revenue in 2015 and expects to triple that figure in 2016. All of Pinterest’s revenue is acquired through ad products including Promoted Pins and Buyable Pins. 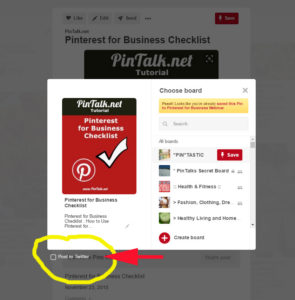 Posting a Pin to Twitter is a timesaving technique for a brand looking to build a following. Social media account managers can simultaneously post to Twitter and Pinterest using this checkbox. However, it can result it flooding a Twitter stream and swamping your followers with too much activity. Too much activity can mean lost followers.

After it is used once, the “Post to Twitter” remains checked for all future Pins. Pinterest users must uncheck the box during the next Pin. It is easy to forget. More than once, I have unknowingly posted 20 Pins in a row to Twitter. It is awesome when you are posting Pins like “Best Butt Workout” which is completely acceptable on Pinterest but weird for all of Twitter-verse to see!
A permanent way to solve this issue is to go into Pinterest settings and remove the Twitter account. I do not recommend this for brands and businesses.